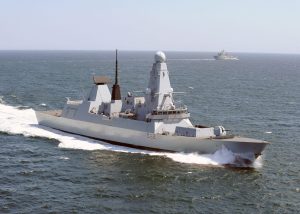 Dentistry in the Royal Navy has come a long way since the late eighteenth and early nineteenth centuries, when the ship’s surgeon was required to perform all dental treatments needed in addition to their other medical duties. Surgeons’ journals and other historical documents tell us of the types of unsavoury operations and therapies that would have been performed in unthinkable conditions, helping to paint a vivid picture of what life at sea used to be like for practitioner and patient.

It is an aspect of history that has fascinated many, and has been the subject of a number of popular culture references. In the motion picture depiction of Patrick O’Brian’s Master and Commander, for instance, ship’s doctor Stephen Maturin can be seen slipping and sliding around the sick bay as he tries to treat wounds caused during an ambush by the French ship, the Acheron. At the time of Napoleonic war and long after, this is exactly what conditions would have been like, made worse of course by poor sanitation, hygiene, and risk of infection.

By comparison, rotten teeth and scurvy seems inconsequential, but as we know poor disinfection of instruments such as the tooth key, tooth forceps and folding gum lancet would have been just as dangerous to sailors’ lives. It wasn’t until the introduction of the County Class guided missile destroyers in the early 60s that a purpose-designed surgery was incorporated into ship design. Even then, it was left to the individual commanding officers to choose whether they should carry a dental officer or chaplain, in a decision that was referred to as ‘teeth or souls?’[i]

Today, all Royal Navy ships are equipped with functioning workspaces designed for dental services. Larger warships, such as the Type 45 Destroyers, have a fully fitted dental surgery in addition to the sick bay, while on smaller ships, such as Frigates, there are portable dental units. Altogether, dental services within the Royal Navy have come on leaps and bounds, and continue to do so. Nowhere is this better demonstrated than the latest addition to the fleet, HMS Queen Elizabeth, which boasts an expansive complex of facilities, including a number of treatment and consultation rooms as well as its very own dental laboratory.

According to a personal account by Royal Navy Dental Officer Bryony Southorn from HMS Queen Elizabeth, compliance was a key element in the design of the state-of-the-art dental facility, with all necessary guidelines and HTMs taken into account to ensure optimum results.[ii] Infection control is important in dentistry, regardless of the setting in which it is delivered, so no doubt every precaution was taken to ensure standards are maintained at all times.

Of course, when delivering dental care on an active ship, there are more than the average risks to be aware of. As Royal Navy Dental Officer Bryony Southorn highlighted in her account, there are a number of other additional factors that have to be considered too. For instance, securing equipment to stop it moving when out at sea and to withstand the shock of a blast – because dentistry isn’t demanding enough as it is!

It’s up to the Defence Medical Services (DMS), which covers all the uniformed and civilian medical and dental personnel from all three armed forces, to ensure that standards are met. The DMS are grouped under Headquarters Surgeon General (HQ SG), the Director of Medical Policy and Operational Capability, the Director of Healthcare Delivery and Training, and the three single service medical organisations. It is the SG, however, that is responsible for setting the overall direction on all clinical matters, auditing professional performance and compliance, and setting clinical and medical policies and standards, amongst other things.

Under the Health and Social Care Act (2008) (Regulated Activities) Regulations 2014, DMS are not required to register with the Care Quality Commission (CQC) as dental practices do. Yet, since May 2017 by invitation of the SG, the CQC has been undertaking independent inspections throughout the UK and abroad to report on standards and drive improvement. So far, the CQC has reported good practice across all areas, including infection control in all three armed forces.

In every way, the Royal Navy is unrecognisable from the service it once used to be. It’s gone from dentistry being delivered by the ship’s surgeon and poor infection control, to providing a fully functional dental team and facilities with a focus on compliance and high standards. Let’s hope that compliance continues to remain a key priority for the Royal Navy and other armed forces, as it does with other dental settings.

[i] Grant EJ. The Toothwright’s Tale: A History of Dentistry in the Royal Navy 1964-1995. Accessed online January 2018 at https://books.google.co.uk/books?id=-cO1BAAAQBAJ&pg=PT15&lpg=PT15&dq=a+history+of+UK+navy+dental+services&source=bl&ots=ZVl5Ssvs3y&sig=cy_A_i55D7WgCR3BXNlFoB5ey5k&hl=en&sa=X&ved=0ahUKEwiuhqeB-PLYAhUhD8AKHZl9D68Q6AEIYzAJ#v=onepage&q=a%20history%20of%20UK%20navy%20dental%20services&f=false