The Six Fracture Modes of Teeth 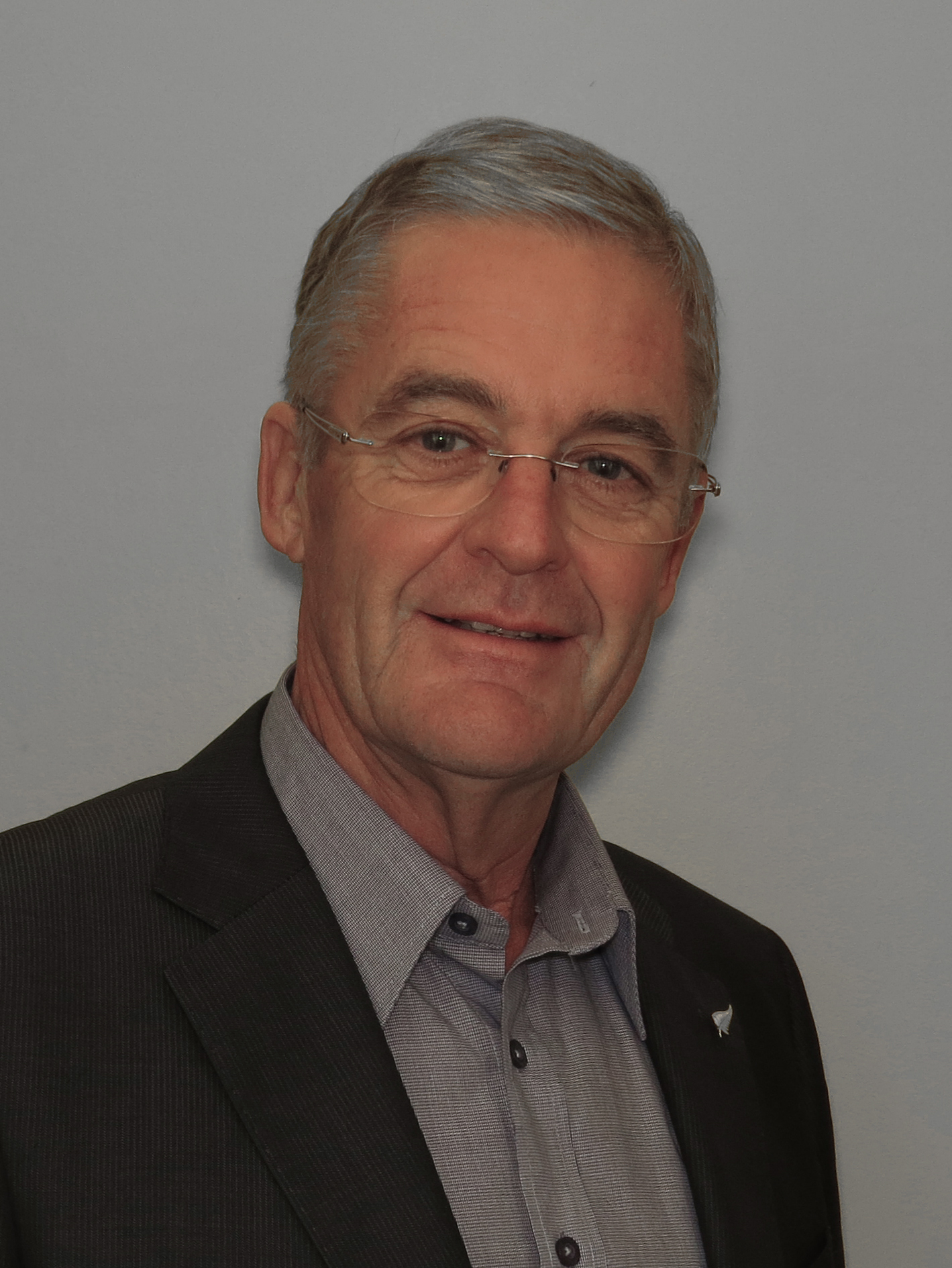 Teeth fracture for several reasons. It is very uncommon for a sound tooth to fail, but once a tooth has had a restoration placed, fractures begin to develop over a period of time. When we look very closely at how Mother Nature designed our teeth, several biomechanical strategies have been employed to ensure they can function for many decades. However, our modern diet and the associated decay epidemic, along with the required invasive management of the resultant decay disturbs the complex stress distribution system within a tooth. Effectively, a tooth behaves like a compression dome, similar to a cathedral dome. The enamel Bio-dome is designed to keep the underlying dentine in compression. When the enamel cap is disturbed to restore a tooth, important structures are damaged and this exposes the underlying dentine to tensile stresses it was not designed to cope with.

There are several structures within enamel that work in strain harmony to ensure stability of the tooth. These include the sub-occlusal oblique transverse ridge, Rainey’s Web, the peripheral rim of enamel, occlusal enamel in general, and the Bio-rim (cervical half of the tooth). From a dentistry perspective, we should ideally be retaining these structures when restoring teeth. To achieve this, our primary gaol is to ensure retention and stability of the occlusal surface of the tooth. Minimally invasive dentistry’s primary aims are to manage a pathogenic biofilm and train it back to health. However, this is not always achievable, so protecting the fissure complex from damage is very important. This relies on being able to diagnose a pathogenic biofilm, or the early demineralization within a fissure complex, utilising all the modern technology we now have available, and predictably seal the fissures with autocure GIC. However, once the occlusal integrity has been disrupted, concentrated stresses within the underlying dentine lead to crack propagation and eventual failure of tooth structure. We must recognise enamel is not homogeneous, it is a very complex anisotropic structure, with amazingly subtle variations in ultrastructure and prism orientation, depending on the loads that have to be dissipated.

There are six basic fracture modes within teeth.

The first two are associated with fractures in the peripheral rim of enamel. 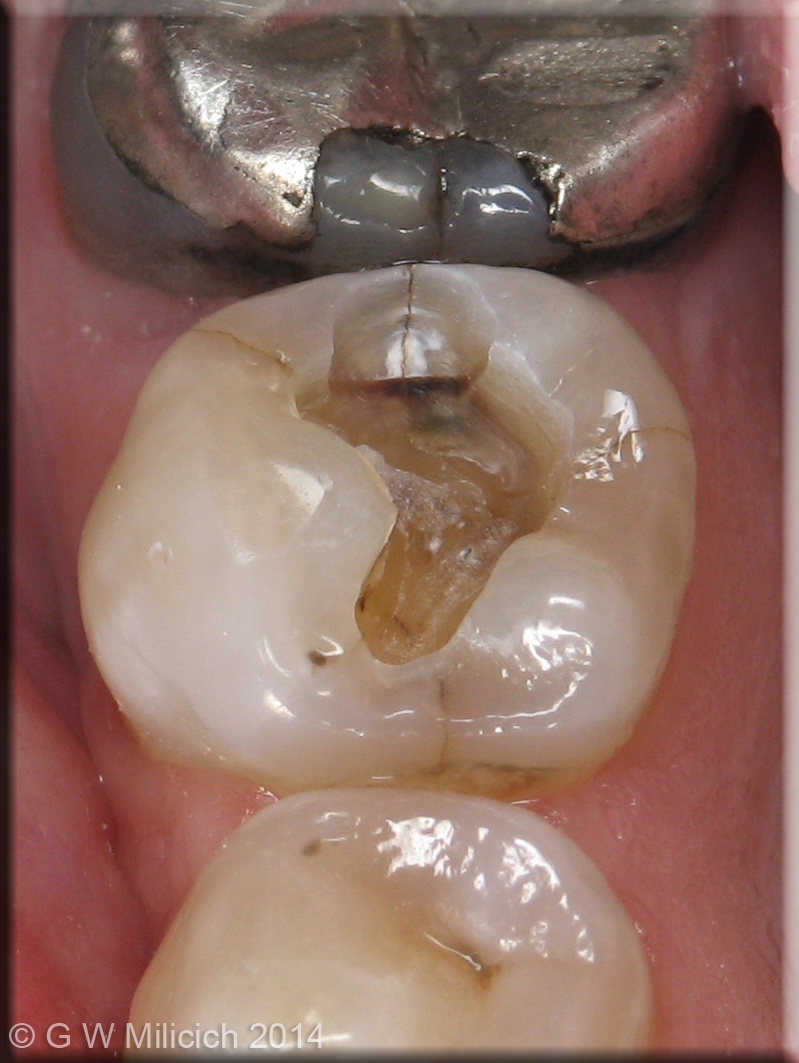 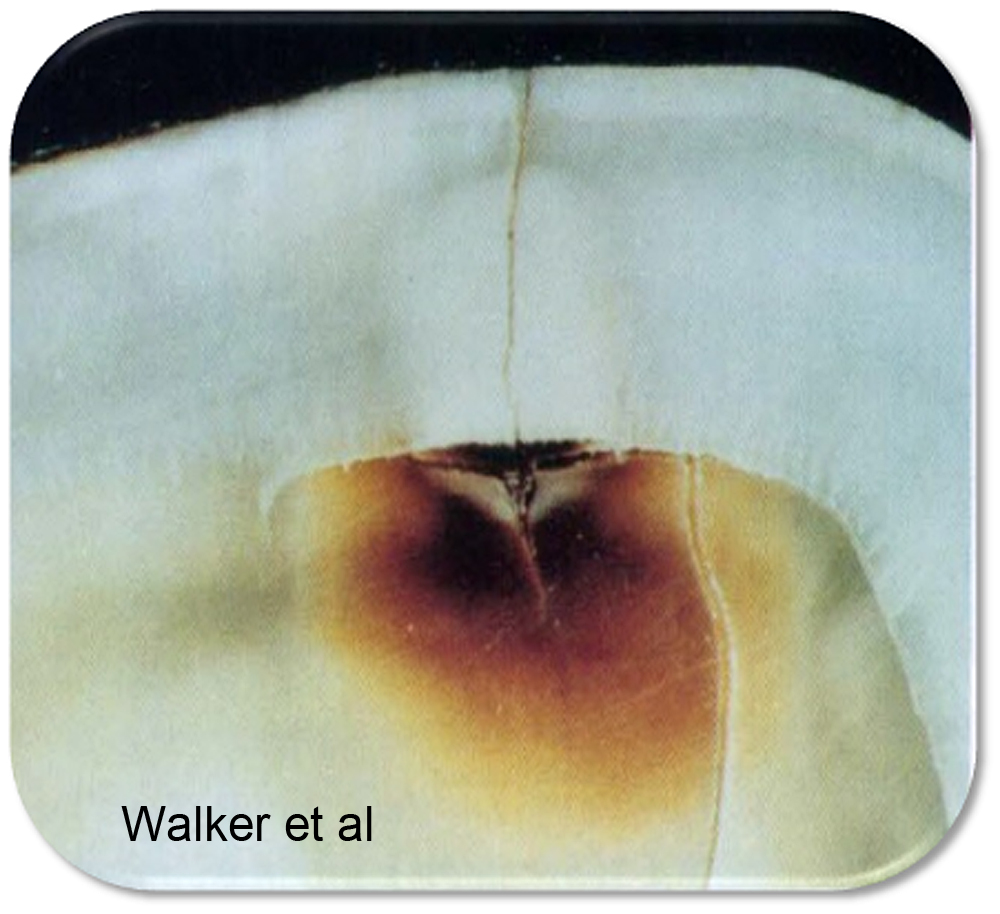 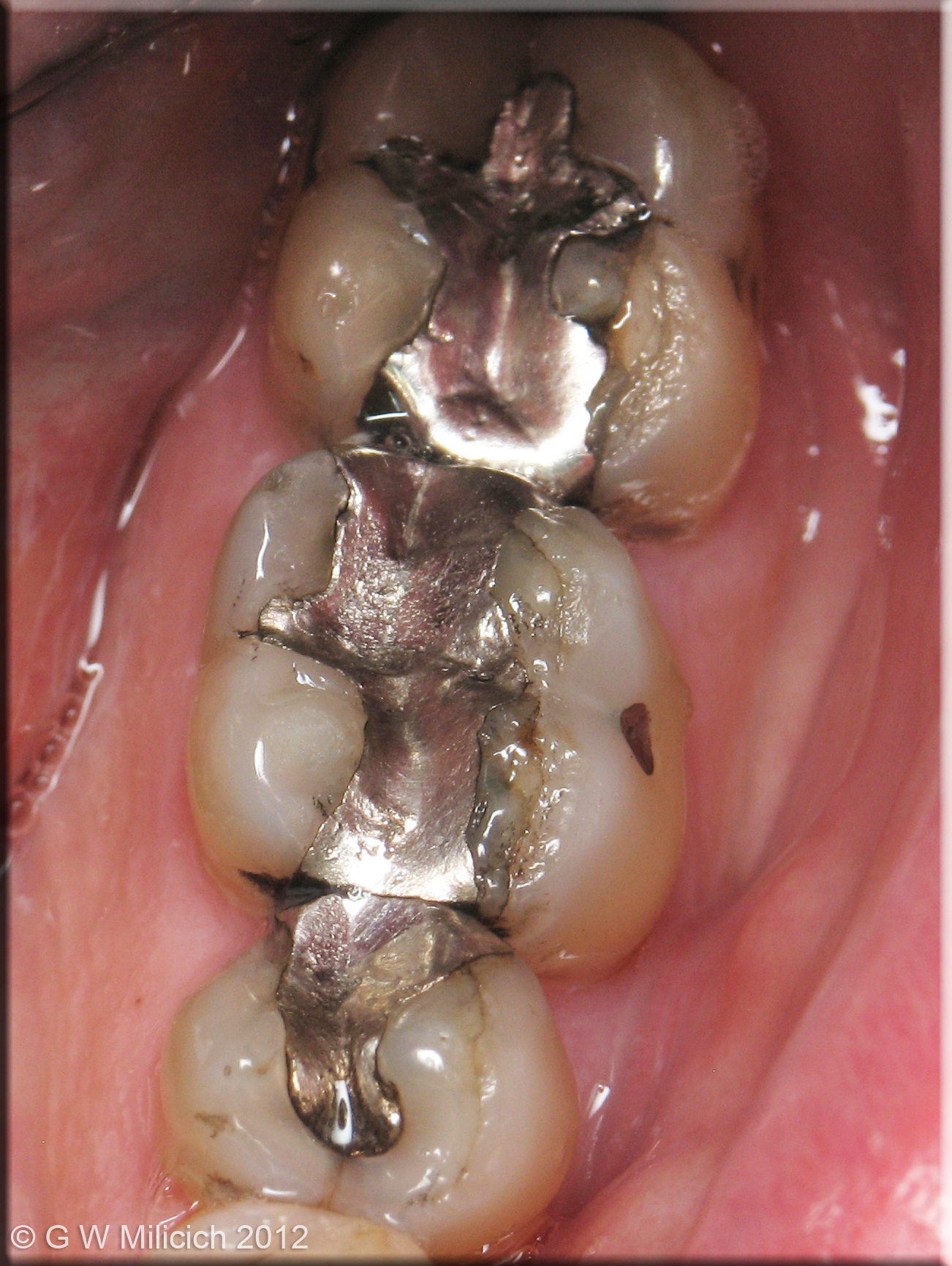 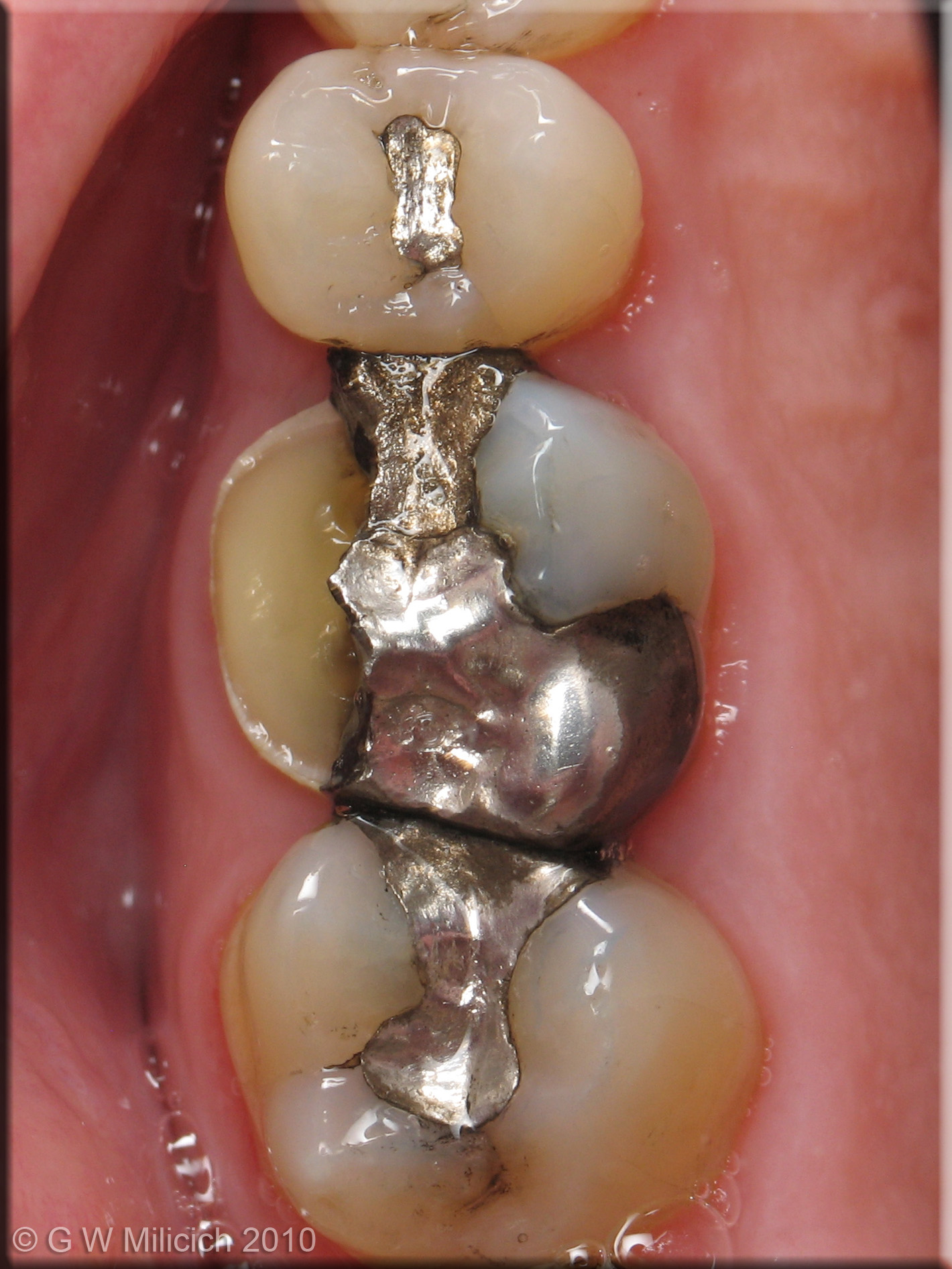 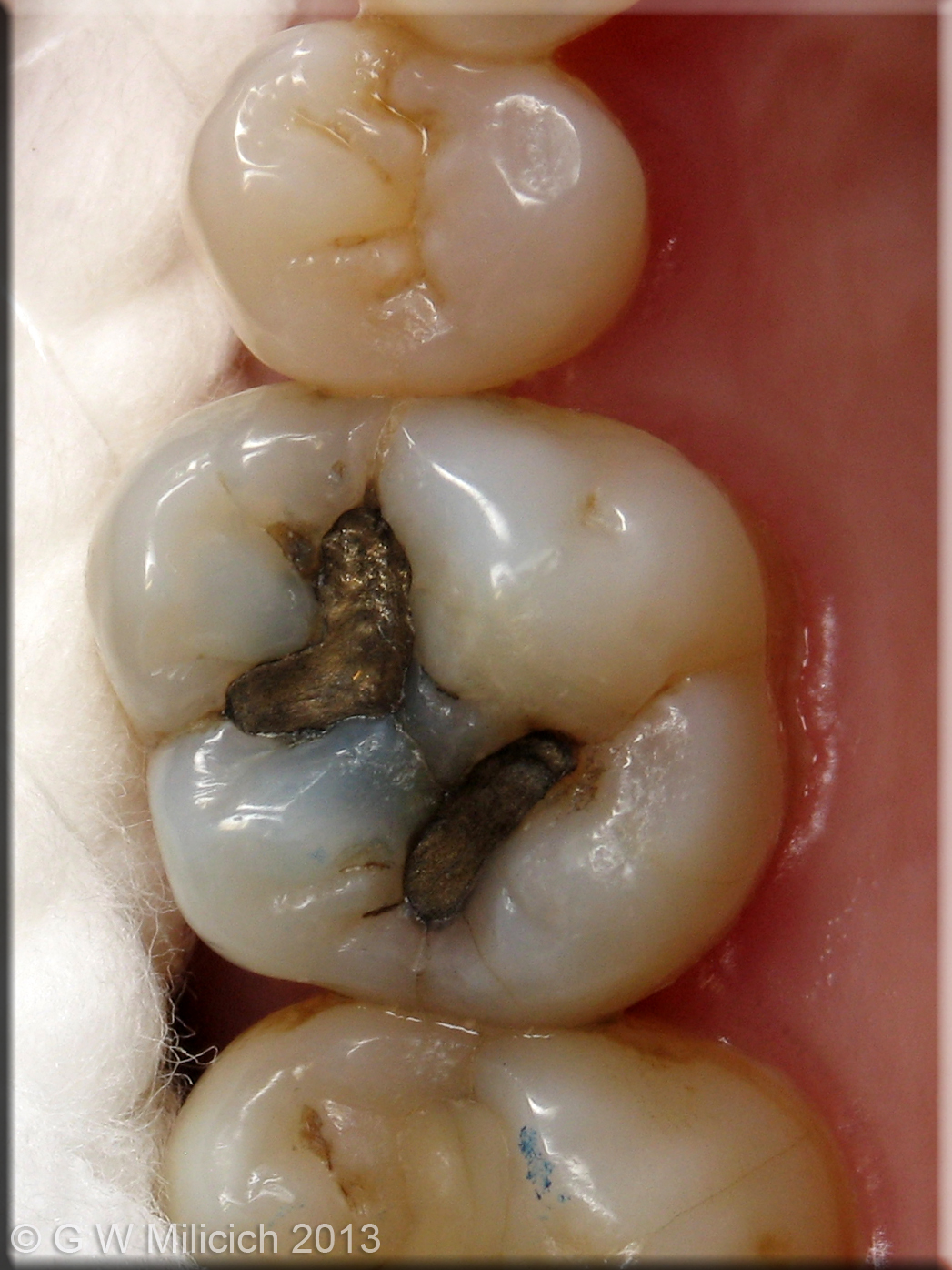 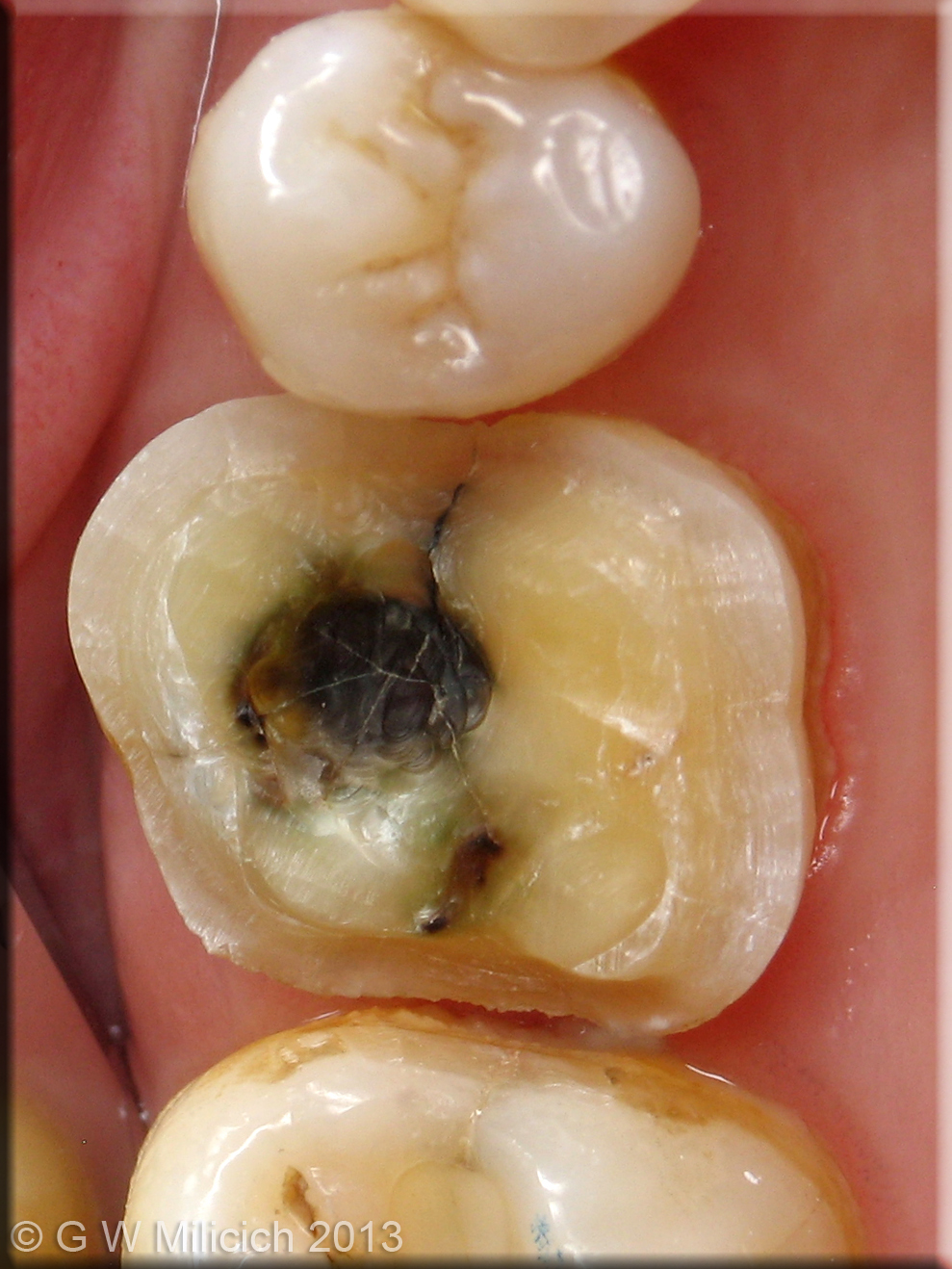 Even though there is “only” an occlusal amalgam, this tooth has developed a mesio-distal fracture, as well as Poisson Effect fractures in the dentine underlying the amalgam.

(This tooth had all 4 cusps fail due to oblique fractures, but it also had multiple Poisson effect fractures)

It is important that the fracture modality is accurately identified because management is quite varied. The primary goal is to identify where the forces that are causing the damage being applied to the tooth. If a crack is not dealt with correctly, the tooth can continue to exhibit symptoms and often a secondary diagnosis of an irreversible pulpitis is made, leading to unnecessary endodontics. If the fracture is correctly diagnosed and treated, the tooth generally settles.

As an overview, the goal is to re-create a stable compression dome to prevent the underlying dentine from being exposed to tensile forces. With more damaged teeth, this is best achieved with an adhesive ceramic onlay. However, depending on the fracture type, many teeth can be predictably stabilised using direct bonded composite in conjunction with Ribbond fibre reinforcing. Success relies on being able to predictably bond to tooth structure in the long term. Some in our profession do not believe this is possible, but clinical success for over 30 years using the Biomimetic techniques described in my lecture in the BDA Theatre will prove it is not only possible, but totally predictable. Once we come to an understanding of how a tooth functions at a biomechanical level, it becomes easier to diagnose the various failure modes of teeth and then predictably restore them. Equally, the less you do to a tooth in the beginning, the less you will have to do to it in the future.

When a minimally invasive philosophy is adopted, and biomimetic restorations become an option, dentists notice a significant change in their practices. The incidence of post treatment endodontics is reported by Biomimetic dentists to reduce by 80-90%, because they are diagnosing fractures accurately and treating them appropriately.

Dr Graeme Milicich will be discussing the topic in further detail within the BDA Theatre at the British Dental Conference and Dentistry Show 2019. Register for your free delegate pass to make sure you don’t miss out.

The British Dental Conference and Dentistry Show 2019 will be held on Friday 17thand Saturday 18thMay at the Birmingham NEC, co-located with DTS.

Graeme is a graduate of the University of Otago (Dunedin, NZ) and maintained a private general practice in Hamilton since 1977 (NZ) until 2017 when he retired from active practice. Throughout his career he developed a keen interest in the area of minimal intervention dentistry (MID), which was considered in decades past to be revolutionary. This area of interest quickly drew his attention to caries risk management, biomechanics and biomimetics as it applied to restorative dentistry – lasers and CAD/ CAM and their applications in minimally invasive dentistry have been at the forefront of Graeme’s expansion of MID concepts.

He has several peer-reviewed published articles and has presented at a national and international level in the field of MID, been recognised by several international bodies dedicated to furthering MID and laser dentistry and has been a clinical educator in CAD/CAM dentistry. Graeme has developed many training resources in the field of MID and undertaken clinical studies into the application of lasers for restorative dentistry.