A female, 65-year-old patient presented to the practice for the first time for a routine check-up and enquired about getting veneers on her worn anterior teeth in order to restore her smile.

A detailed medical history revealed that the patient had undergone radiotherapy and surgical treatment for a malignant brain tumour 10 years previously, which had caused frequent grand mal epileptic seizures at the time. The teeth had chipped as a consequence of the seizures, although the patient had thankfully been symptom free since eradication of the tumour. She was a regular attender to a dental practice (six monthly visits) and she came to us as a new patient following her recent move to the area.

Upon clinical assessment, the patient had good oral hygiene and amalgam fillings in UL4, UL5, UL6, UR6 and UR7. There was considerable TSL (Tooth Surface Loss) on the incisal edges of the upper and lower anterior teeth, as well as on the labial surfaces of the teeth. The wear pattern suggested a combination of contributing factors including acidic erosion due to intrinsic acids (heart burn), an acidic diet and wear during attrition, with consequential dentine wear following loss of enamel.

Teeth LR4 and LL4 were missing but there was no apparent gap, there were no signs of wear on the posterior teeth and the UL6 was awaiting crown coverage following recent root canal treatment. Some reduction in facial height was also recorded, due to overclosure caused by TSL.

The complexity of this case was due to the insufficient space available between the maxillary and mandibular anteriors to place restorations. Various treatment options for the worn maxillary and mandibular anterior teeth were discussed with the patient, highlighting the need to stabilise her condition and prevent any future wear. Options included:

The second option was selected as a more conservative approach. We planned to primarily restore UL4-UR4 and then LR4-LR4, restoring the canine protected occlusion. Some selective occlusal adjustment with some minor preparation (less than 0.5mm) of UL7 was also discussed.

The desired aesthetics, smile line and occlusion should be planned and finalised before commencing treatment. Communication with your dental technician regarding the wax up and articulator position is also essential in order to ensure predictable and effective treatment outcomes. A detailed laboratory prescription was therefore sent to the lab for this case. A lab putty template was created of the palatal and lingual surfaces of the teeth so that the canine guidance and CR could be reproduced in the mouth. The labial surface contours and emergence profile of the teeth were adjusted according to the patient’s appearance as well.

The Dahl Principle has been used successfully in dentistry for almost 30 years. The advantage of this technique is that it is minimally invasive – little or no preparation of the teeth is required.

Once composite bonding has been carried out premolars to premolars, the teeth will be in contact in the desired occlusal scheme. However, there will be no contact in the posterior region. It can take a few weeks to become accustomed to the new bite, but there is rarely any pain. The posteriors will come into contact over the next three to four months. Any minor chipping of the composite can be easily repaired, just as any slight discolouration of the composite due to food and drink can be polished out as needed. When the Sof-Lex diamond polishing system from 3M is used to polish to a high gloss, this risk is greatly decreased and I usually need to check for stains once a year. As the only potential risk when using the Dahl technique, the simple fixes encourage treatment acceptance.

Having used the above technique to restore teeth with TSL for over 30 cases with yearly follow up’s, I have had excellent patient satisfaction with this conservative management of tooth wear. In cases where cosmetic demands are high, patients are able to seek fixed crowns once adequate space has been regained.

In the first appointment, we were able to get the patient into CR using a Lucia Jig, with an increase in the vertical dimension at rest. Once the treatment plan and wax ups were completed, the second appointment involved placing composite (Filtek Supreme XTE Universal restorative from 3M) on the anterior teeth, with cuspal coverage of the premolars. A layering technique was used with dentine, body and enamel Filtek restorative shades from 3M. Flitek Supreme XTE Universal restorative dentine shade was kept to a minimum as the Body shade blends in much better and therefore provides an excellent aesthetic outcome.

Two sets of composite guns and curing lights were used simultaneously to speed up the process, but it still took around three to four hours. Tooth whitening was offered, but the patient declined as she preferred natural aesthetics. The posterior teeth were built up for cuspal coverage using automatrix bands and Filtek One bulk fill restorative from 3M Oral Care.

A week later, the composites and bite were reviewed, with minor adjustments made as necessary and additional polishing performed using the Sof-Lex diamond polishing system from 3M. The patient was extremely happy with the results in this case.

In order to maintain the health of the treated and adjacent teeth, and to prevent caries or periodontal complications, regular dental appointments are a must. Dental hygienist visits should generally be six monthly, although this will depend on the patient’s treatment needs and the recall interval should be reviewed at each visit.

I would highly recommend investing in your own Denar Articular and undertaking training courses on occlusion in order to achieve the best results in these types of cases. I also would always bond alternate teeth at a time so that the separators can be placed more easily. 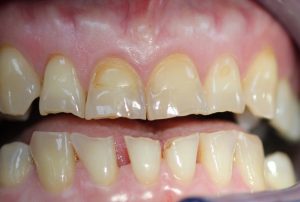 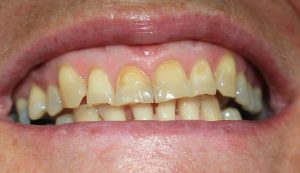 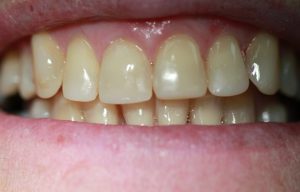 Reema gained a national scholarship to practice medicine and dentistry and graduated in dentistry from Bangalore University in 1995. On graduating she took up a position in a private practice in Delhi before moving to the UK in 2003.